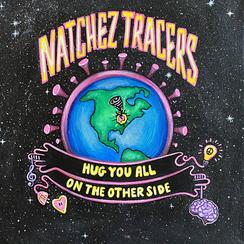 Hug You All On The Other Side is OUT NOW!​

​
Formed in 2014, Natchez Tracers are an original rock band based in Nashville, TN. While offering a healthy dose of improvisation-oriented, dance-friendly grooves reminiscent of the originators of this style from the 60's and 70's, Natchez Tracers deliver a modern take on a classic format focusing on thoughtful lyrics, inspired melodies and unexpected instrumental excursions. Co-Band Leaders Lewis Stubbs and Josh Womack are a formidable anchor for the group, equally sharing the song-writing, vocal and guitar-playing duties. Natchez Tracers keep the live show interesting and unpredictable by utilizing a couple of different rhythm sections and often have repeat guest instrumentalists sit in to add unique spins and colors to the performances. The band is currently booking and playing regional shows throughout the Southeast and beyond supporting their recently released third EP titled Hug You All on the Other Side.

You can email us at natcheztracers@gmail.com

The songs found on Hug You All on the Other Side are pretty topical and relate to this insane year we’ve all just had. Nick Buda (drums) and Ted Pecchio (bass) provided a rock solid foundation for these recordings. Nick and Ted are about the most grooving players around. They’ve played with so many great artists, but both being Col. Bruce Hampton (Codetalkers) alumni takes the cake. Kaitlyn Conner of Maggie Rose, Maradeen, etc. played keys and added some background vocals. Grammy award-winning Engineer Casey Wood recorded it and Jake Burns mixed and mastered the project.

Additionally, our friend Jerika Renee collaborated with us for the custom artwork for the new EP cover and merch.

You listen to Natchez Tracers music  on   SPOTIFY